Reach (for the stars) - (Music Only Versions) - Fascination

Tom Stoltman sent Aim Higher this quick message to all the lovely people to see..stay positive, Stay Strong! Thanks Tom! :-)

Recorded at Active Plus In Hull, March 2022, Performing "Reach" by S Club 7

Aim Higher teamed up with Hull's own "Fascination" featuring Serena & Gary along with Aim Higher members who all gave up their time to record this uplifting song by S Club 7 from 2000, Re-recorded and embelished for World Autism Day in 2022. Special Thanks to Active + for use of their facilities, Serena & Gary for all their time and effort, Gill & Nicola for organising the event, Sponge Bob & His friend, and all you lovely Aim Higher members for reaching for the stars! well done and may all your dreams come true!

A Get Well Message from Balamory's PC Plum to Bailey In Hospital Recovering.

The mum of a Hull seven-year-old battling a brain tumour has described his illness and the difficulties of supporting a child in hospital amid the coronavirus lockdown. Helen Gibson has shared her son Bailey's story from alongside him in his Leeds hospital bed and even managed to lift his spirits thanks to a video from one of his favourite TV characters.
As well as battling a tumour which was first noticed on a routine scan last year, Bailey also has epilepsy, hydrocephalus and chiari malformation - where the lower brain pushes into the spinal cord. He also has autism.
His autism meant the routine he had been in was thrown upside down when he started to need to go on hospital trips for chemotherapy but a charity that helps to care for him managed to step in to help save the day.
"He was quickly transferred to Leeds where a biopsy was done. He was diagnosed with a grade two glioma in the February. In April he started weekly chemo which wasn't easy at all," his mum said.
"Bailey's autism means changing of routine can be difficult for him but the oncology staff in Leeds were great and made sure we did the same thing every week, even sitting on the same bed.
"Bailey could take home comforts with him to Leeds. He had his Balamory DVDs but missed the ones that he had on his TV at home so Aim Higher donated a laptop to us and gave Bailey a USB stick with all his favourite episodes on. This made going weekly so much easier."
His love of the CBeebies show even saw him receive a special message from one of its main characters after a social media campaign was set up by the Hull charity. The video message from PC Plum "put an even bigger smile on Bailey's face" according to his mum. A video of him watching it for the first time also showed just how much he enjoyed it.
"Bailey started watching Balamory when he was at nursery. Because of Bailey's learning difficulties, he's very sensory and visual so he loves all the singing, dancing and musical instruments in each episode.
"As this isn't a short term illness, then whenever he's feeling poorly it'll be good to have something to show him to make him feel a little better." Despite 90 per cent of his tumour being removed in February this year, Bailey started to show signs of an infection a few weeks later meaning a return to hospital in Leeds was on the cards. Due to his weakened immune system, he was unable to fight it off with antibiotics alone so had to undergo yet more surgery, as well as a blood transfusion and lots of scans.
His message from PC Plum has given him a welcome distraction.
However, for his mum, it is still a tough time due to the visiting restrictions put in place due o the coronavirus lockdown.
"The difference of being in hospital with the coronavirus means that no one can visit him and he can't leave his room he's in," she said. "Being stuck in one small room is hard for him but watching his favourite TV has helped.
"He loved the video message. Lost count the amount of times he's watched it. He loves that PC Plum says his name and waves to it. A big thank you to him and Aim Higher and also to everyone who shared the post. You've put an even bigger smile on Bailey's face."

Aim Higher Paragon Interchange FlashMob 2019
To celebrate Autism Awareness Week, Aim higher took their umbrella's to Paragon Interchange in Hull, to flash mob the station, with the help of State of the Arts Academy, BBC Radio Humberside, Dave Burns, and all our lovely volunteers and reps, we all helped raise awareness on 02nd April 2019 by dancing to the tune of "I'll Be There For You" (Theme from friends) by The Rembrants. Thank You again to EVERYONE involved for your time and efforts, It was great to see you all.

Video By: Alan Kyle (www.aklec.co.uk) See the Photographs HERE (Photography Alan Kyle) feel free to download and use.
Welcome to the new Trustees Of Aim Higher 2019 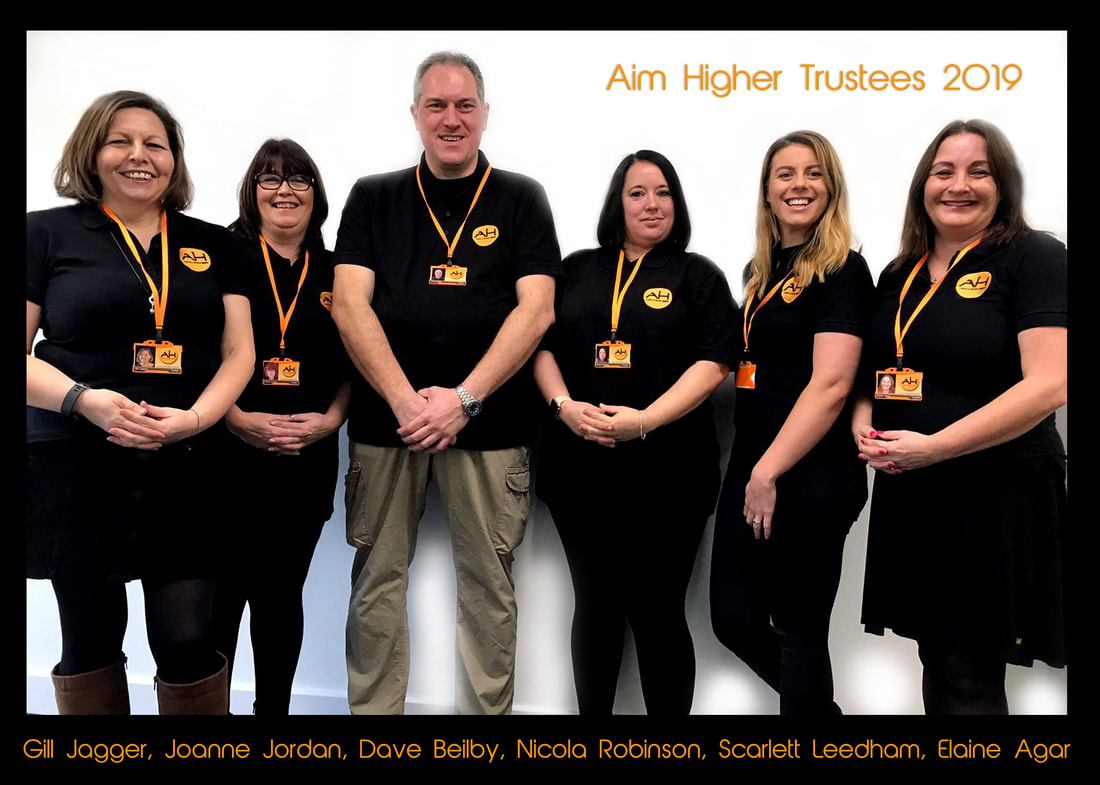 Estuary TV, ITV Calendar News, and Aim Higher were at St Stephens promoting and being interviewed for broadcast on 13th Nov 2018. Gill Jagger, Nicola Robinson, chat to the reporters about Purple Tuesday and what it is all about, and how to get involved.
Aim Higher & Serena Williams - This Is Me (from the greatest showman)

Thanks to Aim Higher & the very talented Serena Williams for making the video happen and music recorded as the new AH Anthem!... Thanks to Craven park, and Rufus for his input too :-) Enjoy!..well done everyone!

The Music track " This Is Me" Serena has recorded is available  >>> HERE <<< and it IS AMAAAZZZINNG! :-)
Pssst...there's also another AH "Bonus" song from Serena we recorded, >>>> HERE <<<< Enjoy!
Also, Did you spot Zak Cook on the drums in the video?... HERE he is playing a solo performance to Metallica's Enter Sandman
Aim Higher Abseil 2018 - 26/08/2018 Video By Alan Kyle
Thanks to everyone who turned out to help with another great activity event
​Special thanks again to Acclimbatize Ltd for their support and expertise in the safe execution of the event.
Climbing down the Holiday inn Hotel at St Stephens Shopping Centre In Hull City Centre
Gill, Nicola, Sally, & Anna dropped in to talk to David Burns on BBC Radio Humberside 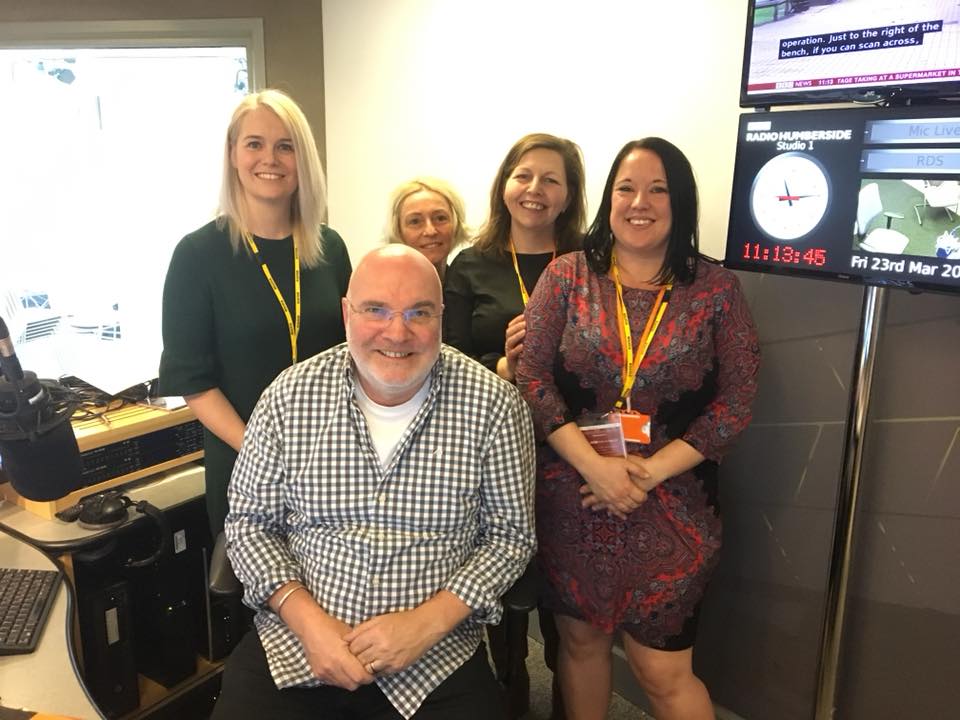 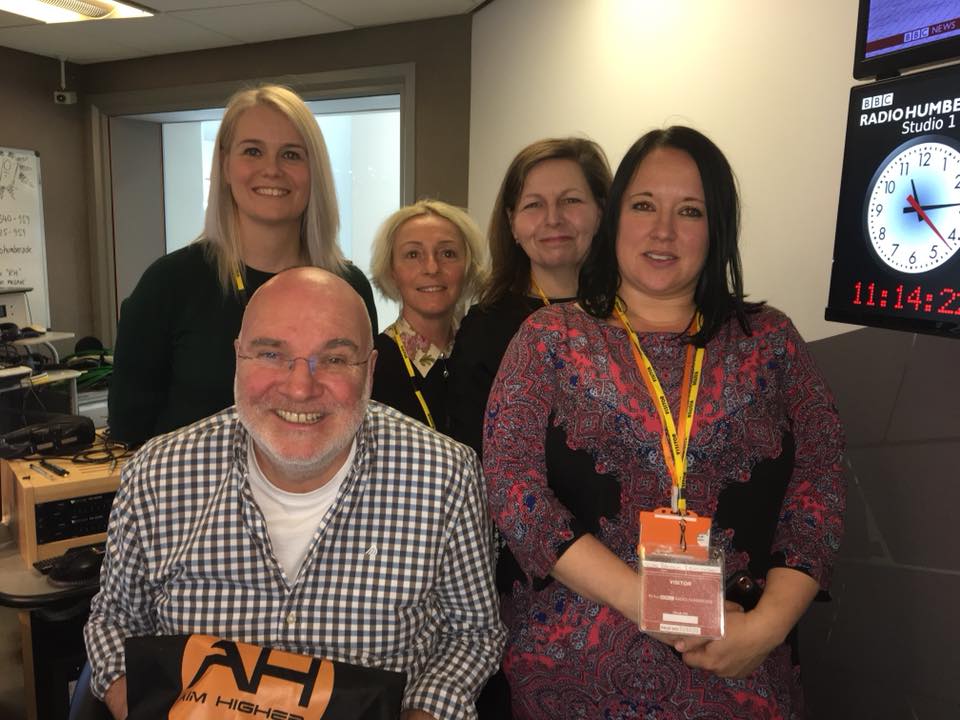 Aim Higher Charity 80's Disco @ KC stadium Hull, 23rd Sept 2017
A fantastic night was had by all in our first ever Disco night & Pie & Peas supper. See you all at the next one!..

Thanks to everyone who took part in our Abseil 2017 event at the Holiday Inn Hotel, St Stephens, Hull on 10th Sept 2017
A decent of over 500 feet! is no easy task..Well done AH Abseiler's :-)
​A special thanks to Acclimbatize Ltd for their great support and keeping all our Abseilers safe
Gill & Anna talk to David Burns on BBC Radio Humberside on 10th August 2017. After David Burns saw Gill at the Aim Higher stand promoting the Sainsbury's  local charity of the year for 2017. he kindly invited them onto his show for a chat.
Thanks To Steve Ashton, The Boxers, & Musicians for their generosity in helping to raise funds by hosting "Rumble at the Rovers" Boxing event on June 10th 2017.
Thankyou Co-op for supporting our cause, Please help by signing up or donating for free by
​clicking here Thankyou!... Please like & share our video..It all helps a great cause.
Thanks to Karl, Sharon, and all the Bikers that turned up to supply Easter eggs on tap to all families of Aim Higher and Echoes Foundation. A great gesture... Thankyou to all who turned out and supported us..
Video By Alan Kyle, Music "Gold Machine" By Alan Kyle
As part of the GMH (Get Maisie Home) campaign, crowds of supporters gathered to sing the Beatles "Help" on January 17th 2016 in Princes Quay shopping centre. Raising awareness locally and nationally with an ITV News clip on the end.
Video By Alan Kyle Music "Help" By The Beatles (Copyright belongs to their respective owners)
Home
Powered by